Although this blog has been silent for a long time, the fact that there's a new Godzilla movie in production warrants an update! Below are links to various news stories online related to the upcoming film:

Godzilla 2014: 5 Things We Expect From The Monster King's Return (WhatCulture!)

Original 1954 Gojira / 1956 Godzilla: King of the Monsters on Criterion DVD and Blu-ray

This week, Criterion released its long-awaited high-definition digital restoration of both the original Japanese classic Gojira (1954) and the heavily reworked 1956 American version Godzilla: King of the Monsters! Available on both DVD and Blu-ray, the new edition is getting high marks for having a great picture.

Posted by Unknown at 8:41 PM No comments:

Bangladesh KING KONG: I Want To Go To There

Apparently there's also an English-language musical on the way: King Kong Musical To Give Regards To Broadway? (Monster island News)
Posted by Unknown at 8:10 AM No comments:

The Criterion Collection edition of Godzilla

Here's info from Criterion's website about their upcoming DVD and Blu-ray of Godzilla (1954). Coming to stores January 24, 2012.

SYNOPSIS: Godzilla is the roaring granddaddy of all monster movies. It’s also a remarkably humane and melancholy drama made in Japan at a time when the country was still reeling from nuclear attack and H-bomb testing. Its rampaging radioactive beast, the poignant embodiment of an entire population’s fears, became a beloved international icon of destruction, spawning more than twenty sequels. This first thrilling, tactile spectacle continues to be a cult phenomenon; here, we present the original, 1954 Japanese version, along with Godzilla, King of the Monsters, the 1956 American reworking starring Raymond Burr.

Godzilla Vs Megalon on DVD and Blu-ray

In November, Tokyo Shock follows up their new edition of Destroy All Monsters with the release of Godzilla vs. Megalon to DVD and Blu-ray:


GODZILLA VS. MEGALON (1973) has been the most elusive Godzilla film in North America. This is the film that most baby-boomers saw in U.S. movie theaters and then had to rely on badly cropped VHS and DVD bootleg copies to enjoy the film thereafter. This entry features Godzilla taking on Megalon and Gigan with the help of the unforgettable growing robot, Jet Jaguar! Reportedly cut to receive a G-rating upon its U.S. release, the film was hosted by John Belushi in a Godzilla suit for its national TV premiere. Tokyo Shock will present the film uncut on DVD and Blu-ray for the first time on November 29!

"Godzilla vs. Megalon" completes the canonization of Godzilla, the creature who came from beneath the sea… to destroy Tokyo and has returned in sequels again and again to protect the land he once loathed. It's been a remarkable transformation of character- the dragon has become St. George.” – Vincent Canby, THE NEW YORK TIMES

Here are the hacienda, my wife and I have become big fans of Mystery Science Theater 3000. Over at Squidoo, I've created a page devoted to the giant monster movies that appeared on the series -- with an assortment of video clips, trailers, movie info and even a couple of polls. It also includes special sections devoted to the Gamera series and the Godzilla series, as well as movies with dinosaurs, sea monsters, giant lizards and more! (There are even links to watch several of the films free.)

Please check it out! MST3K vs. Giant Monsters 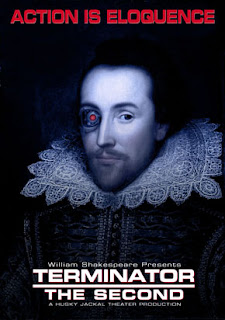 This is crazy: Coming to Nashville in October, William Shakespeare Presents Terminator the Second is a staging of Terminator 2: Judgment Day reconstructed entirely from lines found in the plays of The Bard. As recounted on the official website:

"William Shakespeare Presents Terminator the Second" is the premiere production of the Nashville performance collective, Husky Jackal Theater. A product of nearly a year of research and revision by scriptors and Husky Jackal co-founders Marshall Weber and Cody De Vos, the script tells the story of a boy and his cyborg protector entirely in lines and phrases taken from the plays of William Shakespeare.

In April of 2011, Husky Jackal Theater launched a Kickstarter campaign to raise funds for their production. They hoped to raise a modest $3,000, and finance the rest themselves - the original intent being to perform the show one night only at a local rock club. The project caught the attention of a number of influential websites and publications, including the SyFy channel, Gawker science blog i09, and Mental Floss magazine. The creators were suddenly in contact with supporters as far-flung as Brazil, the Philippines, Australia, and the United Kingdom, and their original fundraising goal was eclipsed several times over, enabling Husky Jackal Theater to vastly increase the scope of its production.

International support (and a healthy bit of pavement pounding) fostered community relationships, as the publicity brought the production to the attention of Nashville's creative class. Various persons reached out and came on board in every aspect of production. The Nashville Shakespeare festival invited Husky Jackal to observe auditions for Shakespeare in the Park's "Romeo and Juliet," establishing contact with several talented actors and actresses from the region eager to join. Eventually, Husky Jackal sought participation from the Nashville School of the Arts, and, thanks to a unique partnership, "Terminator the Second" will debut on the school's main stage in October of 2011, with some cast and stage crew roles filled by advanced production students.

The production will be at Nashville School of the Arts October 14-17. More information at TerminatorTheSecond.com.
Posted by Unknown at 10:53 PM No comments: 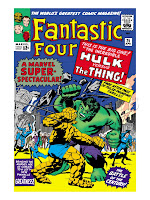 Today would have been the 94th birthday of comics legend Jack Kirby (1917-1994). One of the most influential comics creators ever, Kirby was the creator or co-creator of Captain America, Fantastic Four, X-Men, the Hulk, the Silver Surfer, Thor, Black Panther, New Gods, Mister Miracle, The Forever People, Darkseid, OMAC, Kamandi, Kobra, among many others.

During his prolific career, he also did war comics, romance comics -- and monster comics. Here are some examples of classic Jack Kirby monster comics:

Posted by Unknown at 7:44 AM No comments:

, which follows a group of Norwegian film students that set out investigate a series of mysterious bear killings -- and learns there are much more dangerous things out there. The film was directed by André Øvredal, and stars Otto Jespersen, Hans Morten Hansen, and Tomas Alf Larsen.


The government says there’s nothing to worry about – it’s just a problem with bears making trouble in the mountains and forests of Norway. But local hunters don’t believe it – and neither do a trio of college students who want to find out the truth. Armed with a video camera, they trail a mysterious “poacher,” who wants nothing to do with them. However, their persistence lands them straight in the path of the objects of his pursuits: trolls. They soon find themselves documenting every move of this grizzled, unlikely hero -- the trollhunter -- risking their lives to uncover the secrets of creatures only thought to exist in fairy tales.

Posted by Unknown at 5:39 AM No comments:

Available for Pre-Order: DESTROY ALL MONSTERS

The year is 1999, and all of Earth's monsters have been captured and detained at Ogasawara Island. All is well in the solar system until one day, a race of alien women brainwashes the monsters and releases them, causing havoc around the world. Godzilla attacks New York City, Rodan invades Moscow, Mothra lays waste to Beijing, Gorosaurus destroys Paris, and Manda attacks London!

Posted by Unknown at 8:54 PM No comments:

GIANT MONSTERS ON THE LOOSE!

*Note: The affiliate links on these blog posts take you to the respective titles on Amazon.com. I get a commission from any sale—which means you get the same great price, but you also help support this blog. Everybody wins!

Visions of Another World